How Does the Minimum Wage Affect You, the Employer?

Home/Blogs/How Does the Minimum Wage Affect You, the Employer?
Previous Next

How Does the Minimum Wage Affect You, the Employer? 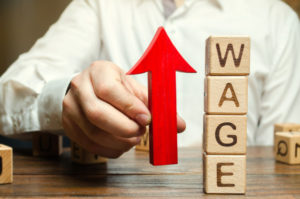 In May last year, the National Minimum Wage Bill was passed, much to the delight of the vast majority of the South African workforce. On the 1st of January 2019, the new law officially came into effect, making it illegal to pay an employee less than R20 per hour or R3500 per month. So, how does this change in legislation affect you, the employer? We’ve got the facts below.

Employers who have recently created and signed contracts with their employees will need to know whether it’s now a legal requirement to amend them if they state that the employee(s) earn less than the required amount. The answer, in short, is yes. Ultimately, the new legislation overrides any contract that came into effect before or after the law was made official.

Most employers will likely wonder what will happen if they do not take the new law into consideration when paying their employees, and continue to pay less per hour than the stipulated amount. In this instance, the employee may choose to claim a violation of legislation as well as a breach of contract. This can lead to various legal action being taken against the employer and could lead to a substantial fine or possible jail time.

What if an Employer Simply Cannot Afford to Pay the Minimum Wage?

The Minister of Labour, Mildred Oliphant, published the Regulations on The Bill shortly after it was passed, and these regulations make provision for employers who legitimately cannot afford to pay their employees the minimum wage. These employees will have an opportunity to apply for exemption via the National Minimum Wage Exemption System.

There are many different criteria for granting an exemption, however. According to the Regulations, an exemption may only be granted if:

Along with this, the employer would also need to confirm compliance with the Unemployment Insurance Fund, Compensation Fund and any applicable Bargaining Council Agreement before any exemption can be granted.

In the instance that the exemption is indeed granted, the employer will need to display the Exemption Notice within the workplace and will have a grace period of 12 months to make the necessary changes in order to be able to comply with the set minimum wage thereafter.

If you, as an employer or an employee, have any questions regarding the new minimum wage law, please do not hesitate to get in touch with SAEWA on 011 827 5353.